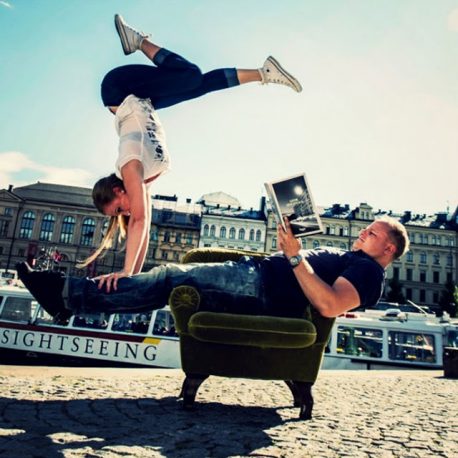 Katerina Repponen and Pasi Nousiainen started to work together in 2010. Their passion for hand to hand acrobatics naturally brought them together. Together they have performed in over 17 different countries. Pasi graduated from circus school Circuspiloterna in Stockholm, while Kate studied at circus school Lahti in Finland. Together, they went on to improve their technique at Kiev Circus Academy. The originality of their hand to hand and foot juggling act allowed them to compete in the ”Golden Karl” International Circus Festival in Latvia 2014, where they won a silver prize.

In 2017 they won a Jury Prize at Open Flair Bochum Festival. They have also had the opportunity to work in many traditional circuses, contemporary circuses, variety shows, street festivals, and theatre productions in all over the world for companies such as Cirque Eloize, Krystallpalast Variete, Circus Monti, Sirkus Finlandia and many more. At the moment the company is performing with three different shows: SUHDE, RAFLA and SOUND BARRIER. Kate and Pasi want to continue diversifying their projects, from big shows, to creative projects, so they can pursue their passion for circus in every respect.